SimTower -- we've all played it, many of us have loved it, none of us have beat it.

So, here we go: the definitive guide to beating Sim Tower!

It's hard to beat a game you can't play, so getting a copy of the game is a good place to start. I got mine at Abandonia.

A note here: the game will run under Darwine on Intel-based Macs... Just don't try and save -- that doesn't work.

After the game is installed and started, begin your tower by using the build-a-lobby-in-the-bottom-left-corner-of-the-screen trick to double your money, then build a lobby that is the entire width of the screen.

After you have built the mega-lobby, start building offices. Lots of offices. Three floors worth of offices. In addition to offices, build stairs. I build them approximately half a screens width from the right side of the screen, then every screens width after that. It doesn't really matter, though -- all that matters is that you've got three floors of solid offices and stairs going to all of them.

By the time this is done, you should have two stars (300 population).

Great -- you've got two stars. Only three more to go. And how will we get there? Fast food.

Why fast food? Well, the hardest part of the star requirements is the population, and fast food restaurants have the highest population to space ratio. Also, no one seems to notice if the only thing in your tower is fast food and office space.

So, time to start building!

Your first order of business is to build two security offices. It doesn't really matter where you put them, all that matters is that you have them -- they are the only requirement for three stars. Stick them under ground, at the beginning of a floor -- where ever.

Now that that's out of the way, it's time to start building fast food.

Your goal is to build eleven (yes, 11) floors of fast food.

To do this, you will also need elevators. Lots of elevators. You will need about six, distributed across the length of your building. I like to build them in pairs: 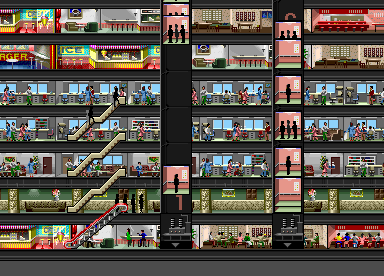 Additionally, you will need to make sure that the lazy sims working in the offices don't use these elevators. Use the inspector tool to look at each elevator, then click the floor numbers to disable floors 2,3,4. Also, I've found it helpful to have one elevator which goes to odd-numbered floors and another which goes to even-numbered floors. Try that too.

Oh, yea, and make sure that all the elevators have eight cars in them.

At some point in the process of building this unholy pile of fast food, you'll get a population of 1000 and hit three stars. Cool! On to the next step.

Once you've hit three stars you'll get the option to build even more exciting things like restaurants, shops and party halls.

But just go ahead and ignore those.

The only things you should be concerned with are:

Alright, and once you've done that, just go back to building more fast food.

At some point here, you will hit a population of 5,000, the VIP will come and you will get four stars. Good job.

And if you get to 14 floors and still don't have four stars, just skip down to the next section anyway.

Oh, your building will catch on fire too. Just pay to have it put out.

Ah, four stars. You think you're almost there, don't you? Ha!

By now, you should be up to about 14 floors. You will finally get a break from the tedium of building fast food as you get to build a sky lobby and revamp your elevator system.

So here's what to do:

Phew, you're at five stars and you've probably got a population of close to 15,000. Your first order of business is to get your population up and over 15,000 (the requirement for a "Tower" ranking). Keep building fast food until you've got that

Once you're over 15,000 population, you've only got to do one more thing: build a cathedral. To do this, pick two express elevators which are at least the width of a cathedral apart, then extend them up all the way to the 100th floor. Build a small lobby on the 90th floor, place the cathedral on the 100th floor, then build an elevator to connect them.

Now you've just got to wait for someone to get married, and your tower will be awarded the rank of "Tower"! (just don't forget to turn off fast mode so you can enjoy the wedding).

And that's it! You're done 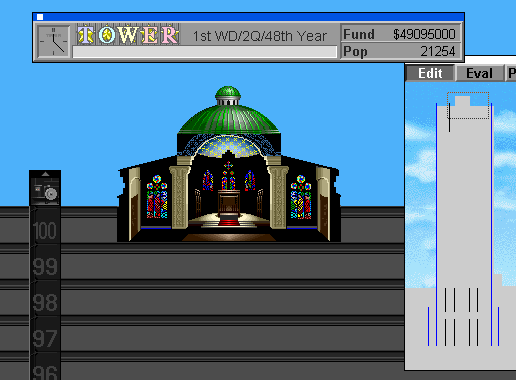 A couple of useful resources:

I work on a lot* of projects which are too small to warrant a full-blown bug tracker (DrProject, Trac, etc), but too big to keep track of bugs/TODOs "just" in code. So I got thinking:

For example, given the code:

And with the liberal use of a 'tags' file, it could even fake editor integration (eg, jumping to tag 'TODO001' would take you to line 45 in foo.c).

So, what do you, the Internet, think? Would this tool be more useful than grep?